[from Kimberly Johnson's A Metaphorical God, 2008]

In this hot light, the seraphim

anything with a little
shimmer to it, and some
allegorical precedent.

O for an obvious angel,
face of flame and flaming wings,
and golden dart enflamed to thrust

my breast and thrusting pierce again,
my breast like honey melting
with delicious wounds. Or rather leave

these Golden-age extremities:
give me a shotgun angel
to shuck me in the back

of his chariot and break
for the state line, shack up, rip
the veil and show me the shining

undeniable face of God.
No such luck. No glorious
gristle for my fancies

but what I bring myself. — See
my jerry-built epiphany?
Car battery wired to my tongue

as I mouth the hallmark motto
of heatstruck martyrs: Lord
let me suffer or let me die.

Posted by Carol Peters at 15:18 No comments: Links to this post

[from James Merrill’s “Lost in Translation,” from Collected Poems, 2001]

Before the puzzle was boxed and readdressed
To the puzzle shop in the mid-Sixties,
Something tells me that one piece contrived
To stay in the boy’s pocket. How do I know?
I know because so many later puzzles
Had missing pieces — Maggie Teyte’s high notes
Gone at the war’s end, end of the vogue for collies,
A house torn down; and hadn’t Mademoiselle
Kept back her pitiful bit of truth as well?
I’ve spent the last days, furthermore,
Ransacking Athens for that translation of “Palme.”
Neither the Goethehaus nor the National Library
Seems able to unearth it. Yet I can’t
Just be imagining. I’ve seen it. Know
How much of the sun-ripe original
Felicity Rilke made himself forgo
(Who loved French words — verger, mûr, parfumer)
In order to render its underlying sense.
Know already in that tongue of his
What Pains, what monolithic Truths
Shadow stanza to stanza’s symmetrical
Rhyme-rutted pavement. Know that ground plan left
Sublime and barren, where the warm Romance
Stone by stone faded, cooled; the fluted nouns
Made taller, lonelier than life
By leaf-carved capitals in the afterglow.
The owlet umlaut peeps and hoots
Above the open vowel. And after rain
A deep reverberation fills with stars.

Posted by Carol Peters at 14:52 No comments: Links to this post

It turns out, what keeps you alive
as a child at mid-century
following your parents from burning
village to cities on fire to a country at war
with itself and anyone
who looks like you,

what allows you to pass through smoke,
through armed mobs singing the merits of a new regime, tooth for a
tooth,
liberation by purification, and global
dissemination of the love of jealous gods,
coup d'etat, coup de grace, and the cooing of mothers
and doves and screaming men
and children caught in the pyre's updraft,

what keeps you safe even among your own,
the numb, the haunted, the maimed, the barely alive,

now that you're older
at the beginning of a new century,
what kept you alive
all those years keeps you from living.

Behind My Eyes: Poems (with audio CD)

Posted by Carol Peters at 15:21 No comments: Links to this post

"In Order" Means Neat and Not Next

Night was next. At some point
On the train the outside dissolved
And she was sitting next to herself in a seat.
In a two-tone gray and blue vinyl seat
With hints of a previous sitter. The dim other
She'd tried so hard to revive but failed
Was staring back at her

Through grit and dirt glass.
These are my footprints, she thought
Looking at her feet, Mary Jo's in Mary Janes.
Made of parts, they nullified the notion of total
Wholeness. The absurd road was obliterated
And all of the moment was inside.
The body buried in time.

Time, a fickle list of numbers.
Sleep was the utopian fantasy
She wished she could fall into.
Eye to the window, to fate.
Feeling but not seeing. Out there was absence
And presence. Out there was a row
Of everything she remembered.

Posted by Carol Peters at 03:12 No comments: Links to this post

11. One wants, the other wants

One wants to be singled out.

The way a knife will not fully separate a shaft of green onion or stalk of celery it has chopped, that is how one remains attached. The way blinding tears come, mincing yellow onions, that is how knowledge of others blurs. The tedious unpeeling of garlic cloves, especially the finicky thin ones near the heart of the bulb, with purple highlights running through the wrapping and skin, that is how the many inhere, clustered.

But one wants to be singled out, unsheathed from the smother of community, a slim, spiralform, marble word.

That word is your name.

There is in each of us an agent that refuses to die. It makes us, it is driven to form us, and has no idea who we are. Zapped by the ultimate fire blast, it will shift shape and endure. Lodged eventually in a crevice of the dead planet, it will wait millennia for rain.

One loves another, one loves himself. One strides through the color wheel naked with arms outstretched, one crouches drawing diagrams on the bottom of the ocean floor. One worries that his heart is going off, like a week-old carton of milk. One that love is leaking away through some hairfine crack.

Posted by Carol Peters at 14:30 No comments: Links to this post 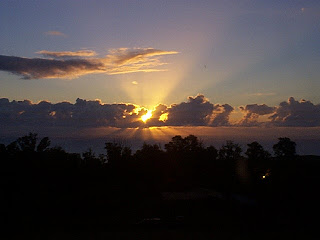 Posted by Carol Peters at 13:07 No comments: Links to this post