for John and Barbara

As with the dapper terns, or that sole cloud
Which like a slow-evolving embryo
Moils in the sky, we make of this keen fish
Whom fight and beauty have endeared to us
A mirror of our kind. Setting aside

His unreflectiveness, his flings in air,
The aberration of his flocking swerve
To spawning grounds a hundred miles at sea,
How clearly, musing to the engine’s thrum,
Do we conceive him as he waits below:

Blue in the water’s blue, which is the shade
Of thought, and in that scintillating flux
Poised weightless, all attention, yet on edge
To lunge and seize with sure incisiveness,
He is a type of coolest intellect,

Or is so to the mind’s blue eye until
He strikes and runs unseen beneath the rip,
Yanking imagination back and down
Past recognition to the unlit deep
Of the glass sponges, of chiasmodon,

Of the old darkness of Devonian dream,
Phase of a meditation not our own,
That long mêlêe where selves were not, that life
Merciless, painless, sleepless, unaware,
From which, in time, unthinkably we rose.

[Poetry Daily reports that Deborah Tall has died and features this poem from her book, Summons, 2000]

a few maimed specimens
are kept for children
to look at -- one baby
loggerhead, its left front leg

a jellied fin, another
flowering papillomas,
ocean water pumping
through a buried pipe.

They surface and stare,
bald heads fixed,
would snap a baby's fist off
gladly.

Inside, under glass, stuffed
snappers and box turtles poise,
and this owl, removed from a wire,
one leg burned off, feathers on end.

Grimly my daughter
surveys their fates,
glares speechless at the cheerful
volunteer guide, retracing the steps

she took just last month
with her patient grandfather,
his death still hidden in him
like her fist tight in a pocket.

He’s still young —; thirty, but looks younger —
or does he? . . . In the eyes and cheeks tonight,
turning in the mirror, he saw his mother, —
puffy; angry; bewildered . . . Many nights
now, when he stares there, he gets angry: —
something unfulfilled there, something dead
to what he once thought he surely could be —
Now, just the glamour of habits . . .
Once, instead,
he thought insight would remake him, he’d reach
— what? The thrill, the exhilaration
unraveling disaster, that seemed to teach
necessary knowledge . . . became just jargon.

Sick of being decent, he craves another
crash. What reaches him except disaster?

Just before dawn a woman and boy have come
to the river, water all stir, boat bobbing
and softly slapping, and soon she is leaning forward

while he holds steady the boat. Where prickling brown
meets smooth shining brown in eddies, they watch
for the sinuous shadow of the eel beside a sunken rock.

The boy’s face suffuses with a quiet glow,
and soon the breaking day will catch him, and us,
whose imaginations strain after the shape in the water,

in its purples and yellows — in a time made simple
by the motion of the waves rocking, filling in
the small depressions in the riverbank, smoothing,

mixing, and dissolving clots of earth. If any
are thirsty, they can cup hands and drink. For now
we are looking into the dark stream and the darker

pools — under a spell, so when darning needles
and water walkers hop, then are flying, whichever
of them falling first falling to the frog who stirred

them up, we only see eel. The boat rocks,
the water almost opaque but for sun through alders
glancing off the crumpled surface in one breath

of wind, then sinking a foot or more, and it is
promise, tone, direction, regret, and love.
This is the power of their bodies, the woman’s

and the boy’s, and of the eyes, jars spilled
back into the river. She holds the spear.
Something moves and piles up.

A flamingo, a gone goose —
darken to gray

as the marsh she sips
dissolves, her legs

chalk-dusting away.
She leaves behind

a string of silver fish
for the full moon,

Posted by Carol Peters at 09:54 No comments:

dawn off the back porch 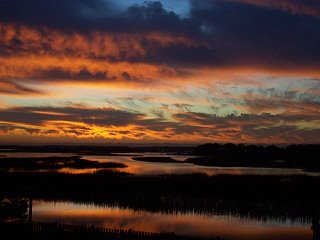 where has she been?

I moved to Charleston this week. We're in the house. It's a mess but splendid. I'll soon be back to work in this study overlooking this tidal marsh. 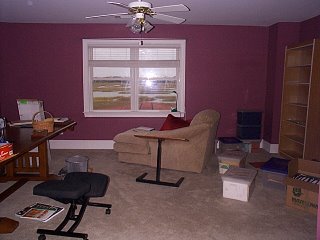 [from Susan Mitchell’s The Water Inside the Water, 1983]

Tonight the bear
comes to the orchard and, balancing
on her hind legs, dances under the apple trees,
hanging onto their boughs,
dragging their branches down to earth.
Look again. It is not the bear
but some afterimage of her
like the car I once saw in the driveway
after the last guest had gone.
Snow pulls the apple boughs to the ground.
Whatever moves in the orchard —
heavy, lumbering — is clear as wind.

The bear is long gone.
Drunk on apples,
she banged over the trash cans that fall night,
then skidded downstream. By now
she must be logged in for the winter.
Unless she is choosy.
I imagine her as very choosy,
sniffing at the huge logs, pawing them, trying
each one on for size,
but always coming out again.

Until tonight.
Tonight sap freezes under her skin.
Her breath leaves white apples in the air.
As she walks she dozes,
listening to the sound of axes chopping wood.
Somewhere she can never catch up to
trees are falling. Chips pile up like snow.
When she does find it finally,
the log draws her in as easily as a forest,
and for a while she continues to see,
just ahead of her, the moon
trapped like a salmon in the ice.

Tonight, because all matter crumbles, your father sits drunker than usual in the red armchair. His back is to the window, level with the yellow sheen of the street lamp that falls on his left shoulder and down his chest. From the other side of the living room, he is an icon in a white undershirt. Now he applies his concentration to balancing the highball on the armrest. Successful, he looks up exalted and tells you how you must carry the tables and chairs, the beds and bookcases, everything you own out into the yard and burn it.

My thanks for Bev Jackson for this one.

If you're searching for a writing prompt today, try this one.

Posted by Carol Peters at 09:56 No comments:

Last week William Logan was poet-blogger of the week at poetryfoundation.org. His grim view of publishing poetry seems another good reason to post one's poems on one's blog.

[from Phillips Lopate’s essay “Against Joie de Vivre,” he is quoting Simone Weil]

The soul knows for certain only that it is hungry. The important thing is that it announces its hunger by crying. A child does not stop crying if we suggest to it that perhaps there is no bread. It goes on crying just the same. The danger is not lest the soul should doubt whether there is any bread, but lest, by a lie, it should persuade itself that it is not hungry.

Posted by Carol Peters at 10:55 No comments:

Posted by Carol Peters at 16:43 No comments:

Old woman with thin white braids. She has shut
the back gate. She is not wise. She has one
golden earring, the hole for the other long closed.
For each rose planted in the yard, a child
goes into the world and brings back love.
Her legs are stretched out before her. This dying
takes so long. This dying does not matter.
She waits for the absence of breath to make her new.

Letters she’s received:
Our Mother is dead — across the sea
like a star winking out — that far away —
but the night is darker, hence the black border.
I’ll send for you and the children —
no note on the table when he left, but two months
later a postcard of Squirrel Hill stuck
in an envelope, the flap not quite reaching.
We’ve found work, Mother. Come
to Cleveland as soon as you can.

She is walking the straight mown lane cut
from a tangle of saplings, sumac, pigweed,
morning glory vine. The whole weight of her
strikes firm on her two small feet. At the top,
if she turns, the woods will be at her back,
like the Carpathian forests where her father
disappeared each Monday bearing an axe. Now,
on her right — the easily observed space,
the hay bound up, the undulating backs of the hills.

How in the night he lay down, variable as dusk.
Later the good pain of the child tearing out,
her screams, the slick and bloody sheets.
Not necessarily acts of love, more like magic
beans — husband as peddler — making someone
who stays; pillar to the roof of family, wheel
to the wagon of home. Promise her birds
to peck out his eyes, elves that slice off
his tongue, gods who root him like a tree, hands
jerked up — fluttering — away from her skin.